The Oscar-winning star admitted he was "very difficult to work with" early in his stage career because he "was usually hungover".

He said he turned his life around following a talk with a woman from Alcoholics Anonymous in 1975.

Sir Anthony, 80, was born in Port Talbot but now lives in Los Angeles.

Speaking to about 500 students at the University Of California, the Silence Of The Lambs star discussed his problems with alcohol and the impact it had on his early career.


He said: "Because that's what you do in theatre, you drink. But I was very difficult to work with, as well, because I was usually hungover."

Sir Anthony added he had been "disgusted, busted and not to be trusted" while he was drinking.

The actor told how he started to change following the talk with the Alcoholics Anonymous woman, who asked him "why don't you just trust in God?".

From then on the urge to drink was "never to return", he added. 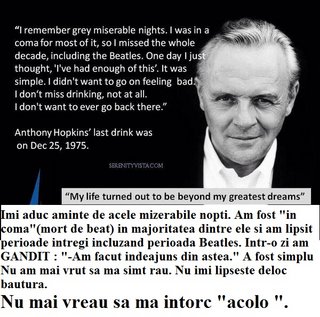